I would like to configure the following network using EVK-1000 equipments.

Would you please let me know if the following operation is possible?

-Use at least (more than) 3 EVK-1000s
-EVK-1000 alternately transmits broadcasting signals, and EVK-1000 that is not transmitting operates as a receiver.
-Attached figure shows the operation of the network. There can be more than four receivers, and when one unit acts as a transmitter, all other units act as receivers simultaneously.
-Finally, I want to get an array (python numpy, etc.) of raw signals obtained over time.

It would be really appreciated if I get answer for this questions.

Thank you so much!! 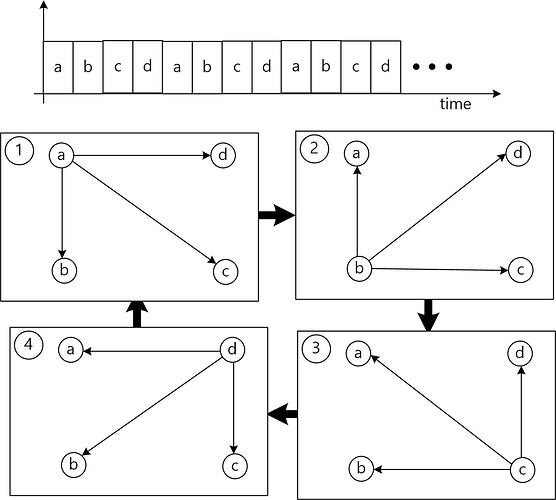 Hey there!
If you build you code for the devices, you can actually make something as you wish. I mean, the way you can use them and they communicate you can program / define that.

For the part of getting data, you probably need to centralize the system using something acting like a server that receives all the uwb data or having all devices connected to a device that can read the serial port and send data,… i dont know…it depends (

Thank you for your answer!

I have several questions about detail.

Firstly, does it mean that the coding is based on python? I have heard that there is a bunch of pthon codes for evk 1000.

Secondly, can you recommand how to centerize it? Is that easily accomplished by connecting all the usbs in one pc or server device?

Actually i am a theoretical researcher so it is first time to use the hardwares. It would be very appreciated if you give me some more details.

So first, follow this link: GitHub - Decawave/dwm1001-examples: Simple C examples for Decawave DWM1001 hardware
Here you learn what do you need to build code. In the simple example you can see all the things you need to do you have a simple communication (estimate a distance with a single-sided two-way ranging) - anchors side and tag side.
Mind that they are only examples, so a lot os aspects must be configured and calibrated depeding on your device. In my case for example, i used the MDEK1001 kit and therefore it was simple too using Segger IDE to compile and load the code on the device. So i did just load the values on the OTP memory and run the example and try to calibrate until i have the desired error.
In the case of communication between them, you have to define the message to send and the way to send and responde. Basically you have to build your own protocol.

About the centralized thing. Well it is just vague to say what you need. But can give you an idea. Imagine that you add another device that is always a receiver. So in your case when the device A start to send to all others and then receives the response, it can send the result to the device you add… Other way is to add another hadware device with bluetooth or wi-fi connection… well as you can see it depends on what you want to do.
Cheerz

First of all, thank you for you kind answers.

It would be very helpful to start and set my own configuration.

(2) About the centralizing
It would be best to start by connecting multiple devices to one PC via USB. However, for making that to be possible, it seems that each connected EVK-1000 device should be labeled as different devices in program (C, python, etc.). Can that part be done automatically?

Additionally, I’d like to ask the difference between EVK-1000 and MDEK 1001 (what you have used).

I think MDEK 1001 is not about UWB; is that correct? I need UWB signal data thus now I have considered EVK-1000.

Thank you for your kind answers!

Hey!
Well i could be kinda confused with your last explanation.
All of this information you can find on decawave page. There’s a lot of documentation where you can take to learn about this technology.

MDEK1001 is a kit that brings 12 DWM10001-dev devices and the are programmed with the PANS2.0. I needed to program my version of firmware because i wanted to test things where the PANS2.0 can give it to me. For that i used C code on segger IDE, as i linked before.
About python implementations, i dont recall to using it to code devices… Probably the python usage is for post processing operations, like i do. In my case i only read the ranges from the device (tag) and use a python script to compute position and others operations)…
Hope i could help.
Cheerz

Thanks for all you kind help.