What the Range meaning? and Density? 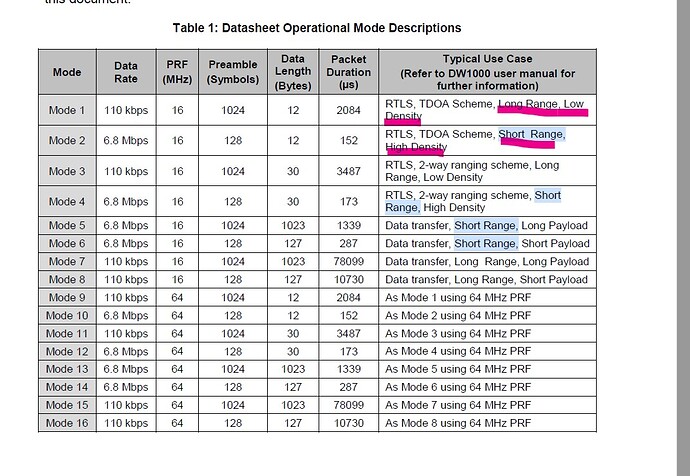 dear all:
DW1000 has 16 modes configurations,which depending on TDOA Scheme/2-Way ranging Scheme,Short Range/Long Range,High Density/Low Density.what does Range mean? what does Density mean?
I guess the rang means the distance of Anchors,the density means the number of Anchors.Am I right? please give me a hand,thank you !

There are actually many more modes depending on choices you make for channel, preamble length, bit rate, preamble code, etc. The ones listed in the DS are examples and the chip is not limited to just those settings.

I guess the rang means the distance of Anchors,the density means the number of Anchors.Am I right? please give me a hand,thank you !

Range describes the distance the radio signal can go. Packets with longer preambles improve the ability to detect and decode the packet, so their range is longer when sent at the same power levels.

Density describes how many packets you can put into the air and not collide. Naturally, if you have a packet which takes more time transmit, you will have to send fewer of them in the air time available.

Thus the system forces a trade off whether you want to optimize range or optimize capacity by which configuration you choose.

The trade off is made more complex when considering regulatory power limits. While a longer packet has more range at the same power setting, a packet shorter than 1 ms can potentially be sent with increased power due to the way the regulations are measured. Namely, the power is measured averaging over a 1 ms period of time. This means a packet that takes only 250 us (and you assure silence for 750 us before and after the packet), then it can be sent with a 6 dB higher transmit power and still make the same average power as a long packet. Decawave calls this “Smart TX Power” in the user manual.

In our experiments, we find that longer packets don’t actually help range all that much when considering the ability to boost the transmit power of short packets. For that reason, and our desire to have exceptionally high capacity, we operate generally with very short preambles and packets, which means a packet might only last 120 us. A 1024 bit preamble lasts over 1 ms by itself.

thank you for your help.