Hi,
I just downloaded the design files for the WB001 reference antenna.
According to the datasheet the antenna is optimized for a 1.6mm PCB
and after I imported the design files into my PCB I checked the impedance
and according to my two reference programs (TXLine & Saturn PCB),
the impedance of the “50 Ohm Trace” is more like 70 Ohms.
The width is 1.5mm and a 1.6mm PCB should have a spacing of ~1.5mm between TOP and BOTTOM.
To fix this I would have to double the width of the trace which sounds strange to me.
Am I doing something wrong or are the design files just not optimized for 1.6mm PCB?

The thickness should be 0.8mm. The document needs to be fixed

Hello. I would like to make this antenna with 1.6mm thick FR-4. If I change the width of the trace to make sure it is 50 ohms can I expect it to perform the same as a 0.8mm thick version?

I would like to make this antenna with 1.6mm thick FR-4. If I change the width of the trace to make sure it is 50 ohms can I expect it to perform the same as a 0.8mm thick version?

In theory, yes, the antenna can be made to perform similarly with a thicker board. It won’t be exact due to offset of copper planes, and the extra board material involved. You may not want to change the width of the trace as the following example indicates.

We sell a variant of the WB002 antenna (the so called “man” antenna since it looks like a head on shoulders). The WB002 was originally on 0.8 mm thick material, but we build ours on 1.6 mm thick material to lower costs.

You would think you would have to revise the feed trace width for the change in plane separation, but we didn’t make much of a change. The feed line is starting to act more like a differential pair with the ground plane than just a stripline, so we didn’t widen it out all the way to where 50 ohms would be for the thicker board. 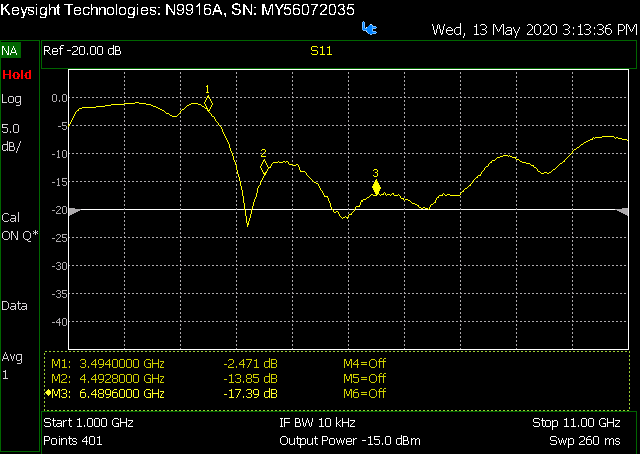 There are markers at ch 1, ch 3, and ch 5. An S11 of -10 dB (only 10% of the energy comes back) is considered a basic threshold of reasonable performance. An S11 of -20 dB (1% energy reflected back) is super awesome. Achieving better than -20 dB is difficult and insignificant to system performance.

For completeness, here is the Decawave supplied WB002 antenna S11: 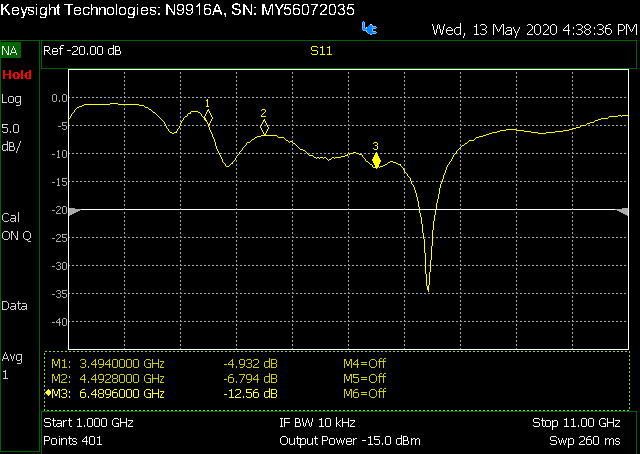 Pretty good at ch 5 (94.4%), mediocre at ch 3 (79%), and a little worse at ch 1 (68%). Our antenna and Decawave’s version are basically the same copper but with different board thickness. Their feed trace is “right” for 50 ohms, ours actually isn’t, but like all things RF, it isn’t as straightforward as one would hope.

I suspect your board thickness change will result in pretty good behavior, but you may have to experiment to find out for sure.

We have a bunch of your antennas. They work great. Thank you for explaining. Those plots are impressive, nice job.

I think I’ll save the experimentation for later and use 0.8mm WB002 for now.