The DWM3000 is interoperable with the Apple U1 chip (Beta Evaluation)

You can find the code and relevant information here link
You may need to register before downloading the package.

for the Type 2AB | UWB Modules | Murata Manufacturing Co., Ltd.
how to buy it ? i already sent the inquiry to them , but they did not answer

I talked with Murata the last week about UWB and their Modules and Dev-Boars.

They currently face the problem, that apperently both at Qorvo and NXP, there have been Revisions for the UWB-Chips in past weeks.
So they are currently manufacturing new Boards with those new Chips.

The Murata Sales-Rep told me that they will be available at the end of September.
But I think you will run into the same problem as with Mobile Knowledge, regarding the fact that they primarly sell to companies and not individual developers.

And I can also tell you, that they use the same Software, as provided by Qorvo. So you won´t get any more APIs regarding AoA and so on.

thanks and very appreciated

for your updated information

i just want to buy and test ** the NXP SR150 uwb trimension / dev board ,murata type2bp-evk → Murata Type2BP EVK: Trimension SR150 UWB Development Kit | NXP Semiconductors **
because that board has 3 antennas on board , so i can get the 3D AOA from the side of the board

however at this moment , there are only with NXP SR150 with dev board ,murata type2bp-evk as the link above , will be able to display 3D AOA to developers on the board side , (not iphone11 side)

Please let me know my 4 questions above

i personally wish and cheer to Qorvo produce the board with 3 antennas as fast as they can , in order to get 3D AOA azimuth ,elevation angle on the side of the board , as iphone11 did , because in fact , all boards from Qorvo are more affordable to reach by individual developers than other companies , if more cheaper than the current price , is more ok

because it is more easier to decide to buy it from individual developers ,

1: Yes, even the Murata Qorvo Board doesn´t have 3D AoA, simply because there is no Chip from Qorvo with this feature. And I can also tell you, in my opinion, that there won´t be one in the near future. Because even the Qorvo Sales-Rep I talked to never mentioned anything in this direction. They are currently working on ramping up production for their current Chips.

2: This hasn´t something to do with discrimination. The problem lies within the the legal problems regarding this whole UWB topic. Apple made their proprietary protocol for communicating with UWB. They also hold a lot of patents in general. They don´t want to openly present their ideas and technology, like with everything they do.
And so if there is a company like Murata, that sells a Dev-Board, you will also need the according software.
And exactly here lies the difference between Qorvo and NXP+Partners:
From Qorvo, you can get the Software “openly” (with the legal agreement, that you don´t use it to develop products with it). But the important NIQ library, which contains the structure and filling of the Apple Data frames, that are exchanged via BLE before the UWB communication starts, are hidden in a pre-compiled library.
At NXP, you get nothing as an individual. As a company, you basically sign a NDA when you buy the Dev-Boards from Partners, so you are much more restricted in the legal way. But in return, you get all the information needed, as long as you pay for it (At Mobile Knowledge the Software and Documentation makes up 1300€ of the expensive kit!).

3: Simply put: NO, at least not at the current stage.
In my opinion, their focus right now is strongly on the automotive industry. Because in this sector, it doesn´t matter, if an UWB modul costs 5€ or 20€. They can pay those more expensive prices, which Qorvo and NXP have right now. And the prices will drop in the future, when they ramp up production and make the production more effective. But right now, there isn´t this big of a market, so they are concentrating on those sectors, that are fine paying more.
I personally agree with you, that individual developers should be considered, because then there will be a faster development of Software and applications. But it is not the case right now, at least in my opinion.

4: No you missunderstood me. From Murata for example, you simply get the board. No Software no Documentation. So you need the Qorvo Software from their website. I just mean, you don´t get more, than you already get from Qorvo. This is also true for the NXP board from Murata. They DO NOT provide the software, at least according to their Sales-Rep. They said you need to ask NXP about the Software. But they won´t give it to you, I can promise you that. So buying the NXP board from Murata is kind of useless.
The second vendor for NXP Dev-Boards is Mobile Knowledge. Those guys provide two kits: A 300€ one which can simply do the iPhone example we already know from Qorvo. But in this case you get the full Software with no pre-compiled libraries. And they offer a 1600€ kit which provides full documentation and an SDK for developing your own UWB programms.
But as I mentioned, you don´t get a Kit from Mobile Knowledge as an individual developer.

for your response
1.) sound ,very sad

after hearing that Qorvo will not have the plan to produce the 3D AOA in this moment
2. understood

, great for the informations

3. thanks , for understanding the individual developers

4.what is about the vendor uwb Sunway with ?

Yeah, Sunway is one of the module manufacturers for NXP UWB Chips.
And they have, at least provided 3D AoA.
But three things:
You will need to get your own 3 antennas, because the module only has connectors for antennas, not antennas themself.
Secondly, I don´t believe they have any software for it. Same problem as Murata. The Software is from NXP themfelf, which is obvious, because NXP manufactures the Chips themself. The module partners just take the chip and place it on a module with the needed close components.
Mobile Knowledge are the only ones I know, that sell the NXP software with the Dev-Kit and modules.
Murata and all the other ones, just sell the modules. Murata told me, that they don´t even have the full software from NXP. They told me you have to get the software yourself from NXP.

And the third problem is, that according to the NXP side, Sunway is only providing Chips for China:

So there are 2 vendors in this moment that will provide 3D AOA → murata 's dev kit and sunway 's module ,

i also emailed to sunway to ask for that modules and their dev kit , but no response since 2 weeks ago .

i do not know why all are so quiet about that

******other stuff about Qorvo NI demo app , i am not so understanding about how azimuth and elevation angle work ,
3. during testing the Qorvo ni demo app with iphone11 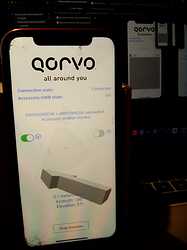 sometime the 3d arrow moving so slow and sometimes got frozen about 10 seconds then slowly moving to point to the dwm3000evb and sometime does not aim correctly . I do not know why ? you know why ??

4.2) for elevation angle , is measured from plane line (observer local plane ) to the ideal line of sight that draw from iphone11 to dwm3000evb ?

I personally have no idea which brands offer UWB antennas. I mean you can do PCB antennas, but then you have to design the antenna. If you want to buy some, you probably need to ask the module suppliers if they now some chinese brands who offer UWB antennas.

The link is the following:
https://www.nxp.com/products/wireless/secure-ultra-wideband-uwb:UWB-TRIMENSION

If I read it correctly, I believe that your understanding of Azimuth/Elevation is right.
The slow and buggy Arrow is probably software based. We have the same problem.
But there has been an update on the Qorvo Beta Software. And now there is a Demo video and in this one their arrow looks way smoother. Maybe they fixed the arrow in the update. You have to try it.

Completly unregarding:
My internship at my current company is comming to an end. So I will delete my account here around the end of the week. Just so have a heads up that I won´t be answering anymore

, i will test the new QORVO update software , very thankful to let me know that Qorvo recently updated the software

that hear that you will be left soon in this week
wish you having happiness ,

have a nice day

i just updated the Qorvo Beta Software , and saw the Demo video

, and the 3d arrow looks a bit more smoother , however I SAW THE DEMO VIDEO OF QORVO , in the video , the arrow keep following the dwm3000evb too fast ,almost real time of the movement of the dwm3000evb , regarding to the updated Qorvo NI Demo app that has been updated 12 September 2021 that change the app logo to Decawave logo ,too ,on my iphone11 after recently updated the Qorvo NI Demo app , I SAW THE MOVEMENT OF ARROW IS better than the before ( the first version of Qorvo NI demo ), ** BUT NOT TOO FAST AS THE DEMO VIDEO FROM QORVO DID

, I DO NOT KNOW WHY THE ARROW OF THE MOVEMENT OF UPDATE QORVO VIDEO DEMO IS MORE FASTER THAN MY ARROW FROM MY UPDATED QORVO NI DEMO APP??

The other thing that i could not get the ring sound as the Qorvo demo video when th iphone is nearer the dwm3000evb , please Qorvo / Decawave let me know why ? 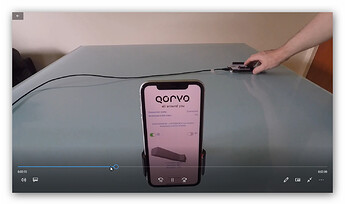 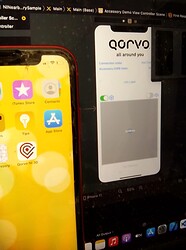