Can I use the decawave software and the new iPhone 11 as a tag? Or is the iphones 11 hardware/software locked down?

The iPhone announcement is indeed interesting. In fact the phone supports CH5 and CH9 (same as our new DW3000 device, MP Q1 2020) and has gone through FCC UWB certification. In theory the DW should be able to work with the phone but for the moment the Apple API is locked down.

Sounds about right unfortunately so much for using it for rtls. Would be sweet if it was in the Apple Watch 5 too

Per one article I read: 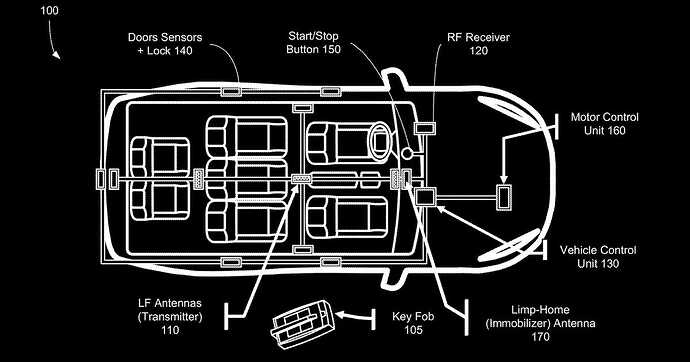 Android will get an answer to Apple AirTags. Here's how UWB location tech works

A new Tile tracker will use ultra wideband to pinpoint your keychain or purse. Google support should help the Tile Ultra compete with Apple's AirTags.

The rumor is that it might be that iPhone is based on Decawave chip…I doubt it…but if it’s indeed the case it would be great especially if somehow iPhone outputs its position data to some MQTT Broker in the cloud…Then I could use this app for data archiving, tracking, and analysis. It seems Apple is targeting consumer market - not the industrial/corporate applications… 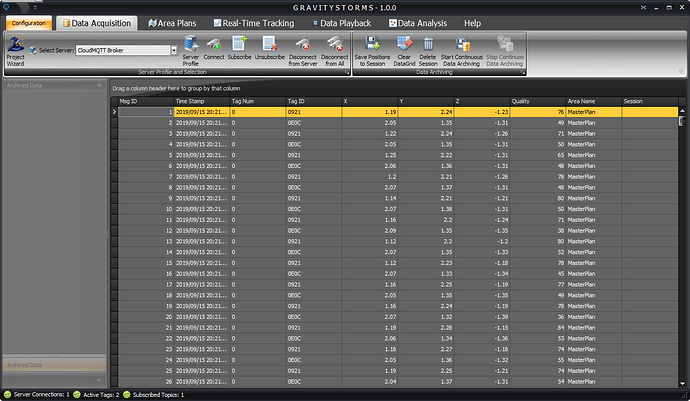 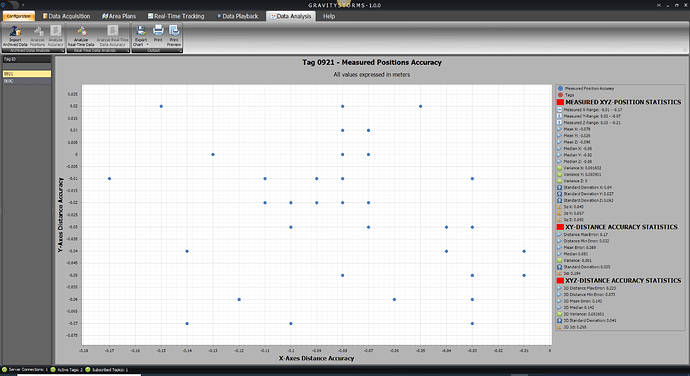 Looks to be FCC IDs BCG-E3306A to BCG-E3309A and maybe some more that I’ve missed in a quick scan.
Test reports are all online but no photos or other descriptions.

Result in the 2nd fig is good, I’m curious about how the it is calculated, and how the localization system is built? Is there any anchors or just use phone self’s chip(maybe multiple antenna?)?

If you are talking about the stats on the chart - it has nothing to do on iPhone - it is a local tool for analyzing the data from MDEK1001 or any other data that is posted to any MQTT Broker as the result of ‘lep’ command.
All articles I read about iPhone so not mention any sensors/anchors and yet, I wonder how it can work reliably without them…I think we don’t know the whole picture about iPhone yet…And yet, there will be a lot of competition to that, starting with Samsung…

They are actively transmitting from all 4 antennas so it’s not just a single Tx antenna and then phase or time difference of arrival on the others to determine orientation.

I’m looking at the FCC test reports.
Go to https://www.fcc.gov/oet/ea/fccid and enter BCG as the Grantee Code and -E3306A as the product code.
That will give you a list of all the radio approvals tests for that model of phone.
Scan down the frequencies list to find the UWB bands (fairly obvious since nothing else is at those frequencies or has such a large bandwidth)
If you click on detail you can then view the test report, in there they describe the equipment under test.

There isn’t a lot more detail that I’ve already posted, just some antenna gains and their transmit powers.

If instead of detail you select summary it will give you a list of all the documents they submitted. Photos of the UWB radio were supplied but have short term confidentiality so aren’t available yet. They are currently listed as available on the 8th of March next year, that’s the maximum period of confidentiality, but will normally be released within a few days of the product going on sale.

Hi, AndyA,
found it, thank you!

I hope this doesn’t lead to UWB airwaves getting congested

The inclusion of UWB in the latest Apple iPhones raises both pros and cons for UWB systems.

A possible downside is congestion of the UWB airwaves with cell phones emitting UWB. For now, I consider this possibility relatively remote because UWB will be used for locating, not gross data transport, and it is the gross data transport (wifi and cell) which clogs up bandwidth more than anything else. Additionally, UWB is relatively robust with multiple users in the same area. We’ve run multiple networks together with varying PRF, preamble codes, and channels, and it can be done with varying degrees of success. Our systems really saturate the air with UWB traffic so they are pretty close to the heaviest use of UWB there is.

Additionally, iPhones are presently only able to do phone to phone and phone to tag operations. There doesn’t seem to be phone to infrastructure that Apple has publicly acknowledged yet. So the duty cycle and UWB signal density seems like it will be low.

Also, iPhones are a minority market share of cell phones, about 15% of units worldwide. There are pretty strong reports that Samsung is intending to add UWB to their phones. Only when that happens, will critical mass for UWB in cell phones be reached since the effort to build an iPhone only UWB system isn’t worth.

For developers, the major downside right now is Apple’s closed mindedness towards letting developers work with the UWB system on the iPhone. Ultimately, when other brands have UWB and have it open, then Apple will be forced to do the same or have users elect not to choose iPhones for the lack of those applications.

The upsides to iPhone UWB are many. For one thing, it dramatically increases the mind share of UWB among the public. Now UWB is no longer a niche technology, but something given to the masses (well, the masses with enough money for an iPhone). Basically, Apple has blessed UWB as a viable and useful technology.

For another, if UWB is useful for consumers, it creates a political base for supporting UWB in the regulatory framework. This means, for example, allowing Wifi into 6.5 GHz bands would be a bad idea, something the UWB folks are pushing back against. It also means a push for more uniform worldwide regulations can occur with major companies (Apple and Samsung) behind it. This is good because the worldwide regulatory landscape for UWB has been a mess and stunts many applications.

Lastly, there’s the basic utility of having UWB in a cell phone. It means, for example, a human tracking system might not have to provision tags since the humans bring their own UWB tag with them.

Consider one of our applications, Museum of the Bible, which has an UWB network with 600 anchors and tracks 3000 digital guides over 43,000 square meters of floor space on 7 floors. The guides could be replaced with user iPhones (or Samsungs) and an app. Now the museum doesn’t have to handle the guides. They can also issue temporary UWB enabled phones for visitors lacking that capability, but in time, that will become less and less prevalent.

Overall, the Apple UWB thing is going to be good for everybody in UWB. I don’t see a huge technical issue developing, and it sure will help with the political and market side of things. Real critical mass will occur when Samsung joins the party.

Additionally, iPhones are presently only able to do phone to phone and phone to tag operations.

So can an iPhone A in practice (or at least in theory) produce a ranging estimation towards an iPhone B (without using any other infrastructure other than the connectivity between them)? If yes, with how many other devices (other than iPhone B) do you estimate that an iPhone A could at the same time be able to do that? Could that amount reach lets say 100 (or even 100*100 for simultaneous estimations across every possible pair of iPhones)? I have zero experience with this type of signals.

DW1000 will continue to be produced and shipped!

The device has a strong foothold for many industrial applications globally. Importantly CH2 is supported by this device where as DW3000 will support CH5 and CH9 only.

iPhones are presently only able to do phone to phone and phone to tag operations. There doesn’t seem to be phone to infrastructure that Apple has publicly acknowledged yet

Consider one of our applications, Museum of the Bible, which has an UWB network with 600 anchors and tracks 3000 digital guides over 43,000 square meters of floor space on 7 floors. The guides could be replaced with user iPhones (or Samsungs) and an app.

My conclusion here is that the possible application you describe (second quote) cannot be implemented at the moment as iPhones does not support interaction with anchors (first quote). Is that right?

My conclusion here is that the possible application you describe (second quote) cannot be implemented at the moment as iPhones does not support interaction with anchors (first quote). Is that right?

As of now, there doesn’t seem to be any way to use an iPhone as a trackable tag in an UWB network, certainly no way officially blessed by Apple.

There are two ways this could happen in the future. Apple could officially enable UWB infrastructure support that app developers could use. Presently, Apple hasn’t opened up any UWB access at all to developers.

Or, by some means, an app developer could figure out how to get the iPhone to emit an UWB packet suitable for tracking, which mostly means some ability to emit packets on demand with identification. But then Apple could deny or remove their app from the app store or other encumbrance, so this is a difficult and risky tactic. So far, I don’t think anyone has claimed to have done it.

The constraints and whims of the Apple ecosystem is why I think UWB only blossoms in cell phones when Android gets UWB support and app developers are free from the shackles of Apple.