How to communicate with listener (without using raspberry)

I connected MDEK module to a computer via micro USB. Tried to get coordinates via TeraTerm Using commands “lec”,“les”. But I don’t get any meassgaes. Commands as “la”, etc. work correctly.

Also we need to set up connection between UART and TCP/IP by means of coneverter.
2. Is it available for your modules?
3. May be you can suggest some better options?

Also we need to transmit IoT data. I tried to send and recieve IoT data via commands “uui”,“udi”. I connected two mdek modules and sent “udi 11223344 100” to one and was waiting response from another using “uui”. But nothing appeated
4. How can we transmit IoT data?

Re 1) For reading the location from TAG you need to have set up the UWB network. Please post here the output of the si command from your node.

Re 2 + 3) I dont have any experience with any ETH-UART transceivers.

Re 4) The IoT messaging are from node (TAG or ANGHOR) to the PC via the gateway + MQTT. It dont work between nodes.

I put 3 anchors, 1 tag and 1 listener.
Here is the communication with listener via UART shell: 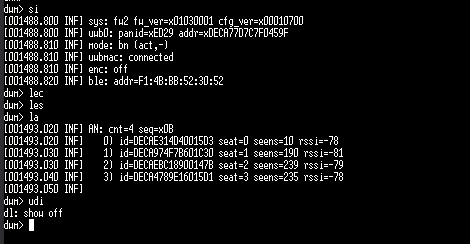 Here is the communication with tag via UART shell: 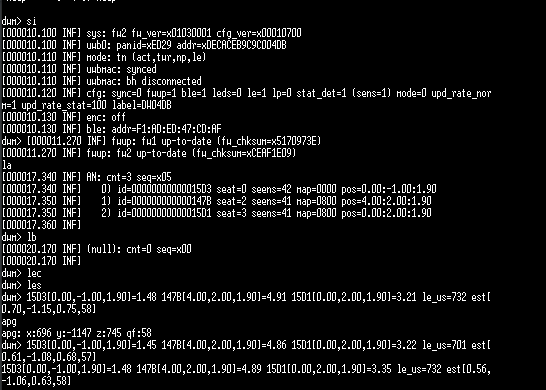 So I don’t understand how can i get tag’s position using listener via Shell.

Next, I’m using Raspberry PI.
I made all steps. Connected to the Web. Everything worked fine. (there is the fourth anchor - i added it after changing the battery. 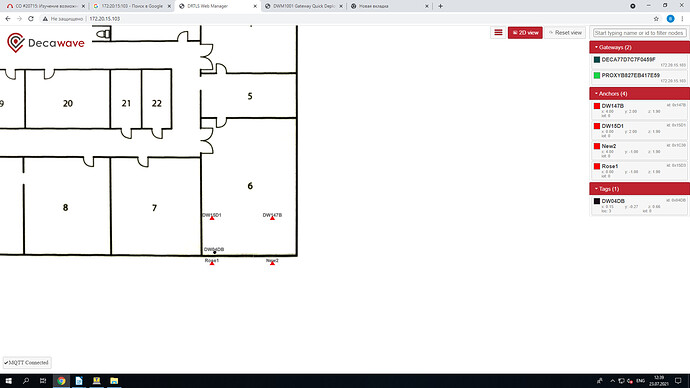 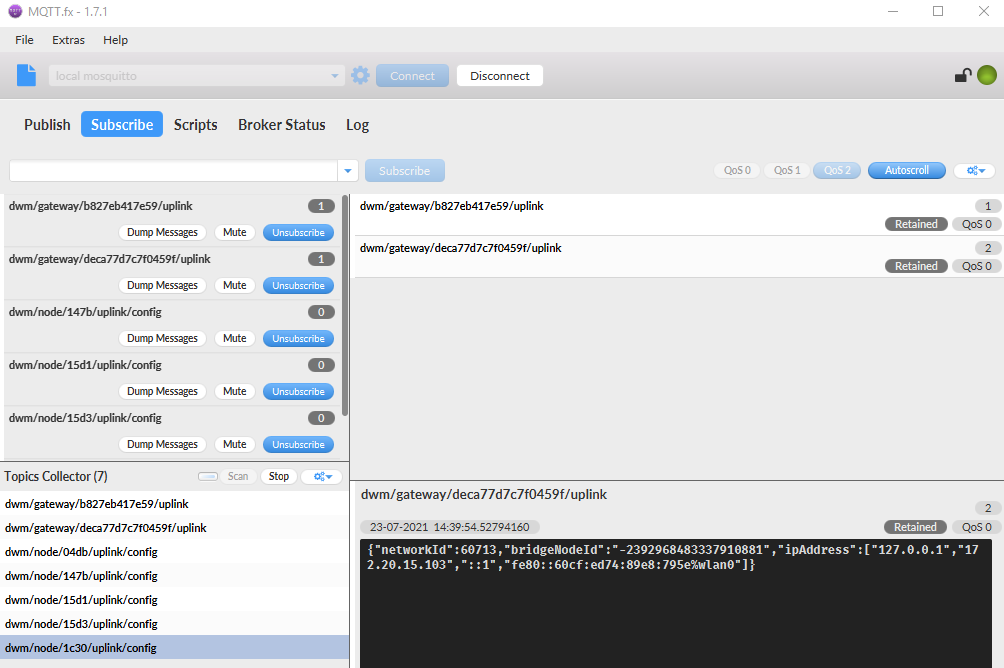 I used this topic 1for solving the problem with MQTT. Also tried 1885, 1883 ports. 1883 worked for getting tag location.
Still I don’t really understand how we can get tags’ positions via listener without using Raspberry.

Hi @what_is_love_chik
you are quietly not following the manual and that is why you have some issues. However you already has solved a few of them.

re Listener) As it is described in chapter 5.4 in the MDEK 1001 Kit User manual. You must switch the Listener into Anchor - passive mode ( “nmp” command). You have it in bridge mode which is wring. Once you are in the anchor-passive node jus just need to type “les” or “lec” or “lep” command which will start printing the positions of tags in UWB range.

Please note that udi command is IoT data and not for location data. The Listener mode does not support IoT data. The apg command is valid only for anchor.

We are also having issues sending IoT data. We set one anchor to passive mode (nmp) and it correctly shows the other tags locations (using lec/les).
From one tag, we send:

But the passive anchor receives nothing.

Hi @nabucco
the listener mode can receive only TN’s position and not the IoT data. For IoT data you need the gateway.

Thank you! It helped!

You must switch the Listener into Anchor - passive mode

Thanks @leapslabs!
We would like to use the SPI TLV commands (API) between an microcontroller (MCU) and DWM1001, where the DWM1001 is set as an anchor (passive mode).

As we understand it, IoT data is only supported via SPI, so we understand the need to add a gateway (plus an anchor in passive mode), which implements the SPI TLV interface. However we do not necessarily need a Raspberry, right?
Can we use a MCU to implement that and read IoT data via SPI TLV?

Thanks for the clarification!

Hi @nabucco
the dwm_usr_data_read/write are meant to be used with tag/angor to communicate with the gateway/ MQTT. There is no way how to read data IoT data from Anchor in passive mode (Listener).

But there is a way how to read IoT data from the node in bridge configuration. Check the documentation “DWM1001 Firmware API Guide” - Chapter 3 API operation flow + Chapter 5.4 Backhaul API Functions. However implementing this clockwork is not an easy task. Much easier is to put there Raspberry PI which will handle this.