I have three questions regarding the frame modulation, mentioned in the DW1000 UserMan p. 216-218.

1) First of all, how does the Pulse Repetition Frequency create 496/508 slots within a preamble symbol? Where does this number comes from?
I thought that the PRF is the frequency of how many pulses can be transmitted per second, why is the PRF for the Preamble not 499.1 MHz then?

2) Why are different modulation schemes applied to the frame?
I understood that for the PREAMBLE one pulse is transmitted per symbol. 1,0,-1 could be mapped.

For the data section, the term burst is used, which can be 2^n pulses. One burst determines with its position within the symbol one bit and with its amplitude another bit. So 2 bits per symbol.

Why is one pulse used for the Preamble and 1-512 for the data section?

3) Which role has the data rate in the modulation?
Is the difference of a low and a high data rate the symbol length of the data section? Such as, by using only 1 pulse per burst in a range of only 8 slots, a high data rate is received? This would result in 32 slots within one symbol by adding guard intervals of 8 slots. So 2 bits can be transmitted in 32*2 nanoseconds?

Even one answer to one of the points would be really helpful.
Maybe some ideas from @decawave @deca_admin?
Best Wishes 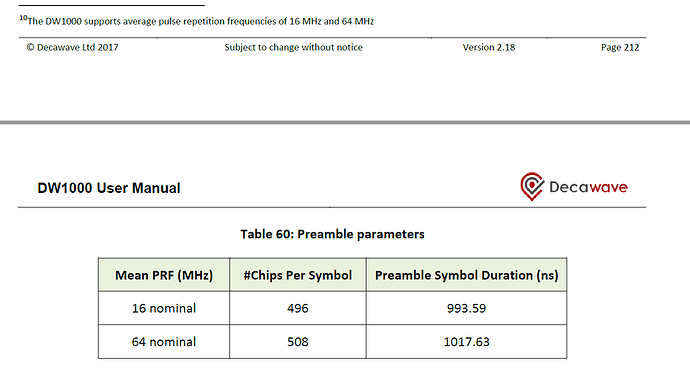 Or have a look at the etsi spec:

For example, in the preamble, the 64MHz PRF uses a symbol sequence comprised of 127 codes, each code spread with a delay factor of 4, for a total of 508 “chips” per symbol. With a chip rate of approximately 2ns per chip, a code is transmitted approximately every 8ns (ignoring the delay chips), giving a peak PRF of approximately 125MHz. However, only about half of the codes in the symbol sequence use an active ternary element (the + or -, and not the 0), so half of the codes are actually silent, which means on average, an active ternary element is transmitted every 16ns instead of 8ns, resulting in a mean PRF of approximately 64MHz.