Hello,
I have 2 DWM3000EVB boards, attached to nRF52840 development kits, and I’m trying to capture raw channel impulse response. I have run into some issues while doing so, and I need some help. Here is the procedure -if anyone else is also interested-

The issues and questions are as follows:
When I print the CIR, I can only see roughly 400 samples, instead of 992. I tried printing out the indices in the above script, and realized that some random indices are missing. E.g. it jumps from 55 to 105, and the jumps seem to be random. Instead of reading all data at once from accumulator (992*6+1 samples), I tried reading them one-by-one in the for loop, but this also gives a similar result.
Q1: How can I read the CIR without any package loss? Is there a better way to capture the CIR, instead of printing the values?
Q2: How can I read the output of the display without JLink RTT viewer, and what are good sources to read about that part further?
Q3: I’ve seen people verifying the CIR information by displaying, and checking values for DWM1000. Since the data format is different here (each sample is 3 bytes, instead of 2), how can I check if the CIR is corrupted or not? E.g. I have seen some discussions about the CIR values being less than 30,000 etc, which may not be applicable here due to 18-bit samples.
Q4: My application requires high sampling rate, and eventually I’d like to reduce the inter-frame periodicity. At this point, what would be the practical limits on the device?

For what it’s worth here’s my code for this that seems to work fine. I call this function in a loop reading blocks of 16 values. No specific reason why, it’s written so it should work fine for anything from 1 value to all of them at once. I just used smaller blocks when debugging it and never increased them once it was working because it wasn’t speed critical.

Keep in mind this is a lot of data, quick back of the envelope numbers, assuming you run the SPI bus at 30 MHz you’re still looking at over 1.5 ms to read all the data. Reading the full CIR is not very compatible with high sample rates. I only ever use it in special diagnostics modes rather than normal operation for this reason.

Depending on the application you could read the leading edge location & peak location and then only read the CIR data for that region, that would significantly reduce the time required assuming it gives you the information you need.

I appreciate the suggestions and the code shared. I have used this code to capture CIR amplitude (as in the code), or just the real/imaginary part. I still cannot capture an entire CIR stream, and this code actually made the package loss issue a little bit worse, which may be due to sqrt operation - I remember using an approximation-, or the large memory allocation at the beginning, especially when calling this function repeatedly. I tried to read the buffer at once using this code, but the package loss is still there.

Since I’m still using a similar code for printing the CIR values, is it possible that printf() is creating the actual bottleneck? It may be a trivial question, but is there a better way to read and output the data from the device? I’m not very familiar with these devices, so, any reference is appreciated

Also, reading some portion of CIR is a good suggestion, as I indeed do not need to read everything. On the other hand, the stable duration is not too long (e.g. after first 50 values, some CIR values are lost), and it may not be long enough. Currently I’m using the TX at 1Hz, and I guess the problem can get worse easily with higher SR. I’m hoping to fix this part first, before getting into reading the CIR partially.

How are you outputting this? Over a serial port to a PC?

Serial ports are painfully slow. Is it possible that your serial port code doesn’t have sufficient buffering and so that is dropping the data? In that situation I’d normally expect random bytes to drop rather than whole messages but it does depend a little on how the buffering is done. On the PC side use an FTDI based USB port adaptor rather than the one built into the PC (if it still has one). The USB ones have more buffering internally. At least the good ones do, I’ve seen some cheap ones drop data all over the place if you try to push too much through them. This buffering can be a pain for accurate receive timing but makes it far less likely that you’ll drop data at the PC end.

printf is fairly slow but nothing compared to a serial port, it’s also not thread safe so you shouldn’t call it from an interrupt, only the main loop.
sqrt (or any floating point operation) is slow on a micro that doesn’t have hardware floating point (100’s of cycles) so yes, that’s a big hit on some parts. If you can stick to integer operations then you’ll get a big speed up. I have seen abs(largest value) + abs(smallest value/4) used as an approximation of the magnitude.

The memory allocation in that code is on the stack so as long as you aren’t running out of memory it’s not going to be a significant performance hit and there is no risk of it not getting freed up as soon as the function exits. It’s a far faster and safer way to allocate a temporary buffer on an embedded system than using malloc and then free.

In terms of better ways to do it. No there isn’t a better way to read the data from the device. There may however be a better way of getting the data to the outside world depending on your application. e.g. if you send the raw binary data to the outside world then that will be far less data than converting it to text using printf. Ideally you’d put the raw data into a large buffer and exit your DW chip handling code. And then in the background idle loop you can process the contents of that buffer in whatever way you want.

Thanks for the reply, and the insights about the speed of different code pieces in the system. I connect to the device through the USB port on the Nordic board, and as far as I understand, I can either listen to the packages through UART, or the aforementioned JLink- which I’m using the latter.

I have tried to modify the code to find the bottleneck, it appears there are two issues. One is trying to read too many samples at once from the accmulator, and the second seems to be the speed during printing.Here are my findings: 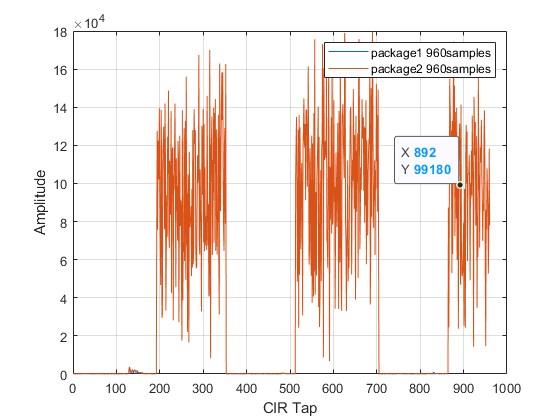 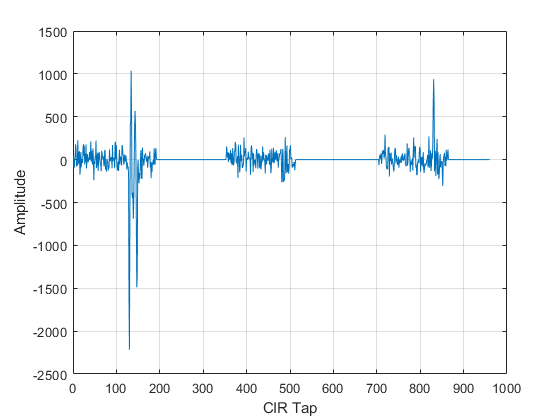 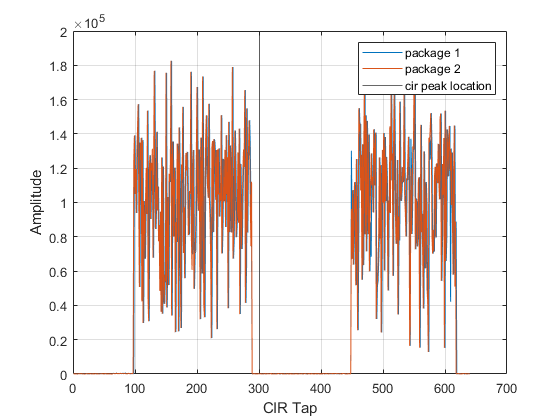 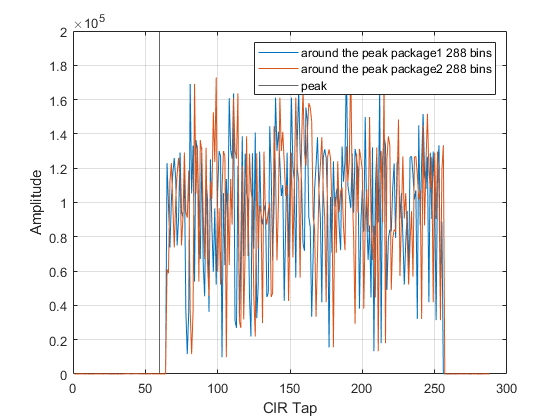 When reading the CIR you should be able to read all of the values in one go if you are reading them directly into a large enough buffer in processor internal memory. The internal memory will be far faster than the SPI link. The speed issues should only arise when trying to output from the processor memory to the outside world.
Are you correctly handling negative values? One of the most common issues I’ve seen is people not correctly converting the 18 bit signed values into 32 bit signed values.

And you seem to have an issue with reading the CIR peak. For any reasonable line of sight configuration and signal level the leading edge will be around an index of 730-740 with the peak a few bins later. I normally run with a PRF of 64 MHz so at 16 MHz this may be a little earlier but it should still be in the same region.

Also, I put the wrong link in the previous post, I was supposed to share the following:

Is there any chance you have signal integrity issues with the module that are resulting in bad data when reading large blocks? I would expect this to cause more fundamental issues than bad CIR data but it may be worth trying turning the SPI speed down just to make sure that doesn’t have any impact.

As I indicated the code I gave has worked for me on the DWM3000 to the fundamental API appears to be sound. That implies it is something with either the hardware or firmware in your implementation but I’m running out of ideas as to what it could be.