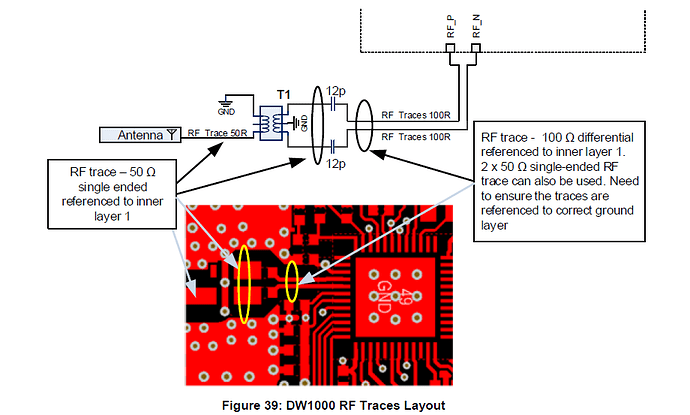 Hello, I am currently developing a custom PCB, and would like to understand what this figure from the DW1000 datasheet means when it says that the 100 ohm differential rf trace can be replaced by two 50 ohm single-ended rf traces. Specifically, when calculating the width of a single-ended trace, it will be larger than one of the widths of a differential trace. Can someone with advanced rf understanding please give some insight into why this figure implies that it is possible to exchange a differential trace with two wider single-ended traces. There must be more to it.

Hi @bstarbuck
Check the image below with the explanation. You can find more info here: https://www.decawave.com/wp-content/uploads/2018/10/APH001_DW1000-HW-Design-Guide_v1.1.pdf 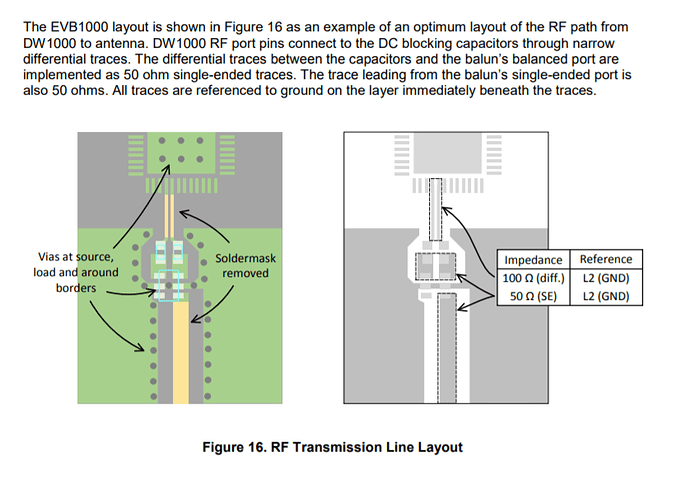 I was hoping to have a more conceptual discussion explaining why the two narrower traces of the 100 ohm differential can be replaced by two larger width single-ended traces to achieve the same result.

In simple words, you have to study what is a “differential output” and differences between single ended and Differential outputs, is a topic related in the most basic form with Opams, but one requirement of the differential outputs at the PCB layout is to match both traces, keep them small as possible (in length), you also need to request controlled impedance process with your PCB manufacturer, and most important the two outputs should be close (close at the specific distance calculated by the software too
e.g. Saturn PCB) in order to maximize the CMRR (Common Mode Ripple Rejection) property of differential output devices.

in resume please don’t do it, if you change that traces to single ended you are going to get a non-documented performance, very possible a bad performance. the 50 ohm single ended trace that is connected directly to the antenna is 50 ohm and single ended, because the balun (white device Balanced-Unbalanced) that is connected before converts the differential output of the DW1000 from Differential to Single ended, in the newest version of the IC the DW3000 you don’t need to use a balun because is integrated in the IC I think or replaced by something and you have single ended antenna pins at 50 ohms of characteristic impedance.