DW1000 not working Tag and determination of coordinates in Node

We have success in our board with initialising Node and also Node fonds Tags from Dev Kit. Our problems:

Could you please give support, point out things worth checking out that we might have missed. 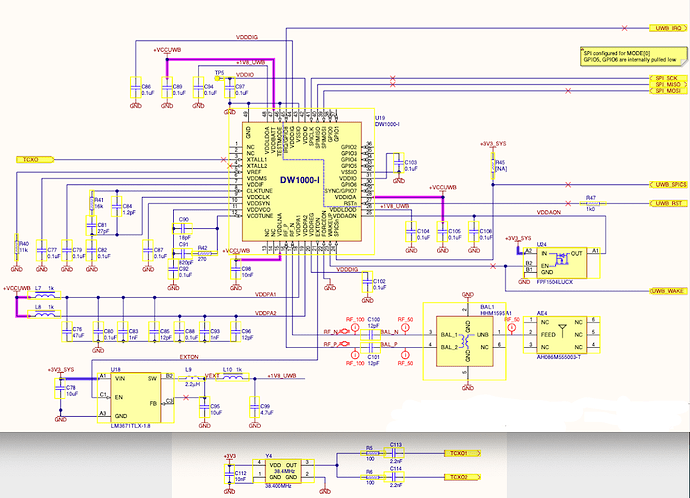 Hi Dmitry,
If I understand you correctly, you are using the same hardware for both Tag and Node.
The schematics that you are attached shows only one DW1000 chip with SYNC pin not connected - for the Node you need to synchronize two DW1000 ICs in order to get correct phase difference.
Would be great if you can share the full schematics.

Hi Alec,
Thanks for your reply.

Yes, SYNC not connected (our Top Level Diagram bellow).
Our hardware engineer had a call with Decawave, where he understood that the SYNC pin is not needed for our task. Maybe there was a misunderstanding.

Is the SYNC connection between DW1000 without connection to nRF enough? 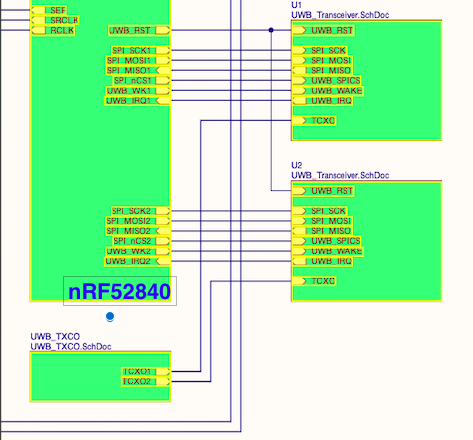 The SYNC pin has to be connected to the MCU (the same MCU pin for both DW1000).
Asserting SYNC pin high resets the internal counters and state machines to the same state so later after receiving a frame from the Tag MCU can extract additional information from CIR buffer from both DW1000 to calculate the phase difference of arrival (timestamp accuracy is not enough).
If you check the DWM1002 Node schematics, you’ll see the SYNC circuit - it’s rather complicated to meet the required specifications (and not all of them to be honest).
Actually you can even toggle the pin simply by the MCU pin, just need to carry out some additional checks.
See

For a well design system, I don’t believe so. Quality coax and connectors shouldn’t need it. The APS007 document uses the Si5317 mostly to recover signal amplitude lost in cable attenuation. Given your short cables, that’s likely not an issue for you. Also, consider the PL133 buffer for something that can take in a lower amplitude clock and create a clean logic level clock. I suggest operating it at 1.8 volts since over driving the XTAL1 input can cause problems and 3.3 volts is a bit too …

Question regarding the PDOA sync circuit of on PDOA beta kit. The DW1000-Datasheet-V2.09, chapter 5.13 (External Synchronisation) This chapter discusses the minimum time required for the SYNC signal relative to XTAL1. On the rising edge of XTAL1, the sync pulse must be hi at least 10ns before and last at least 10ns after. On the PDoA Kit Node Miscellaneous Revision 2v2, the clock buffer CLKIN is from a 38.4MHz crystal module. One of the output of the clock buffer goes to each of the DW1000 (XT…

I also spotted the ceramic antenna you are using. Despite it is widely used in UWB applications I do not recommend it for any PDoA project for a simple reason - the polarization of this antenna is far from circular, which is requred for these types of applications.
With say linear polarized antrennae for the Node and the Tag the resulting phase difference will be dependant on the mutual orientation of the devices, not only the Tag’s position wrt the Node.
The antennae used in Beta PDoA Kit are circular- and cross-polarized.

Thank you very much Alec! 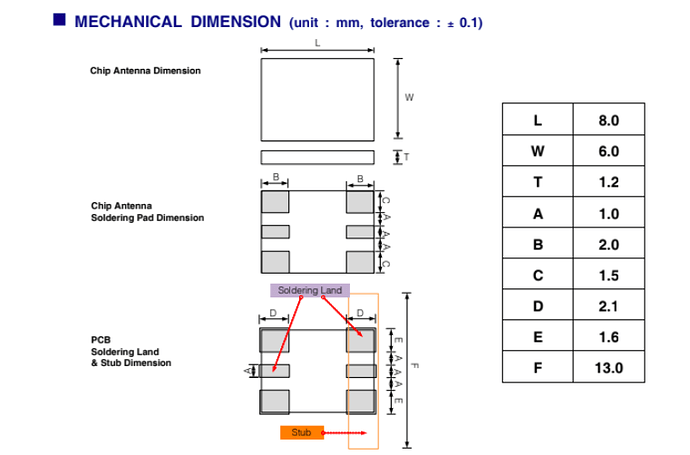 Connected SYNC, implemented next but the same problem.

You can do the SYNC circuit without any flop if you want. Simply output it from the processor, asynchronous to the 38.4 MHz clock, and it can be longer than one pulse width without issue. Yes, this violates the setup and hold times most of the time and there will be a chance the SYNC will not happen on the same clock pulse at each DW1000. But that is easily detected when you receive a packet and the RX-TIME will be 26 ns off, way more than is sane for a PDoA device with two closely spaced antennas. Then just SYNC pulse again until you get both DW1000s aligned. We’ve built devices like that with multiple DW1000s and it works fine, less than 5% of the time do you need to resync, and no added parts! Just need to add a little bit of resync code and you are all set.

I noticed that in PDoA Kit XTAL2 connected to the GND via 100pF capacitor. But in our board XTAL2 not connected. Could this be a reason?