I have a problem that the DWM1001 and DWM01001C seems to be acting differently.
My custom boards are all identical PCB but some have the DWM1001 and others the DWM01001C.
The DWM1001C does not appear to reset at power up and does not reply to any UART commands.
Is there some difference in either hardware requirements or firmware commands?

The DWM1001C and DWM1001 are identical from a hardware perspective. The ‘C’ is for certified, so the software will take the OTP calibration values for Tx power etc.

Have you updated them both to the PANS V2.0 firmware release?

I managed to use NRF Connect to flash PANS V2.0 into the new DWM100C modules and now the commands seem to be working correctly.

I have a couple of quotestion regarding interface to host

Finally, to propely set up the Anchor I just need to use the anchor_cfg_set command and then the pos_set command and now it will run ok as anchor? (of course set node 0,0 as initiator as well).

For trilateration, you will need at least three anchors and then one tag. Or you can do something like this: 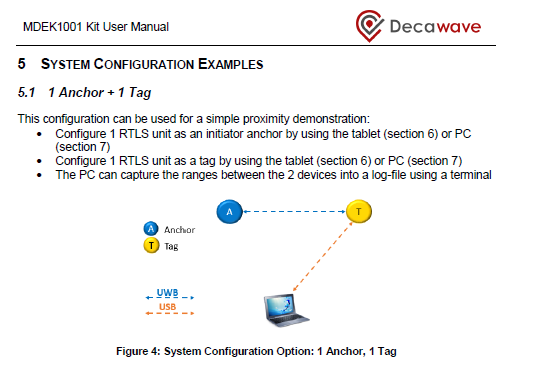 I managed to getr my host to set up 4 anchors (1 as initiator) and another as a Tag and issued get_location command and received data from all 4 anchors (good start). Except I programmed their positions using metres but actually set them up with positions only mm apart. I’ll fix that in the morning.

I have just 3 questions left.

ad 1) The initiator position is not important here but your XY axis assumption is OK. See this image: 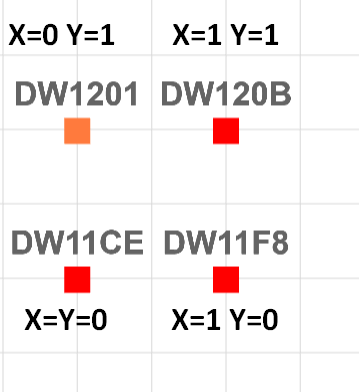 Thanks JK.
So the X and Y values actually work reverse than I expected. X goes poistve to right of reference but Y increases positively as you move further back rather than toward you (if we were standing at anchor 0,0 position).
It is useful to know ack is sent immediately, I assumed for “SET” command sthat it was writing the new values to memory first and then sending ack but if it sends ack first I can set a short timeout but can I then send another command while it is still writing? ie. How do I know the module is ready to receive a command and not busy processing the last command.

I have it running now.

I was not getting position because my 32 bit int (mm) to 4-byte array routine had a bug in it.

Hi @david
regarding XY - it is a standard plot system - XY increases in upper right direction.