Decawave net deployment: Some question about it

Hi everyone
I want to share with you a deployment in a warehouse for a tracking solution (No gateway installed because communications are via wifi). I show you some reference measures in order to understand the distances (All in meters):

What we expect (But doesn’t occur):

My Conclusion: I understand that this is due to a bad synchronization between anchors and this lead to a bad coverage in the area. As shown below, there are breaks in the paths. I think that is a non position resolution (a tag see less than 3 anchors). Also there are some position resolutions outside the wharehouse (not possible). The X Y Z coordinates are ok.

My questions:
Could these path breaks be related with the issues mentioned above? Or is a lack of anchors installed in the warehouse? Any clue of why I get repeated seat numbers? Thanks in advance.
Juan Pablo 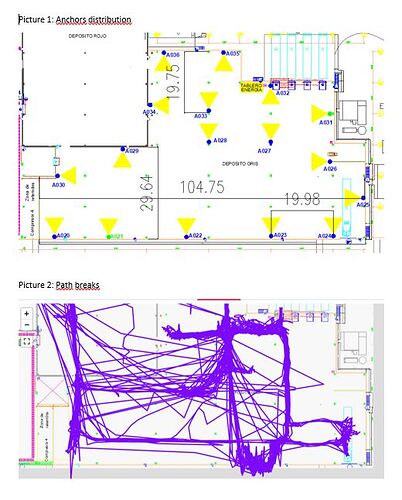 Any clue of why I get repeated seat numbers

Because you have 2 initiators. By having 2 initiators, you essentially have 2 networks. Likely they are competing for the same PAN-ID. Instead you should use only one initiator, not all anchors need to be in range of the initiator thanks to “clock levels”

Hi Seppe, thanks for your reply. I forgot to write that one scenario was using only one initiator. Same result. I will read the link you gave me