Hello,
I’ve started to work on UWB only few months ago, for this reason I apologize if some questions could be trivial ones.

I’m using EVK1000 board for indoor localization with tag & anchor. My goal is to improve its precision till ‘mm’.
To do that, I was thinking to use the received signal at the receiver or the phase in the CIR.
Here the first problem arises: I’m not able to fully understand the CIR meaning.

I attached 2 pictures of my measurements. The first one with different peaks has been taken in NLOS, with wood and metallic interference, at distance of 1 meter.
The second one, instead, is LOS at distance of 15cm. 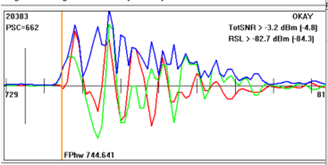 Precision in the mm region is easy. Just set the printf to 3 decimal places.
Accuracy in that range is a lot harder

Best of luck to you with your quest for mm accuracy. This is one of those things where getting an approximate value is relatively simple but then each improvement in accuracy gets exponentially harder.
Before you start digging into the CIR data make sure you have corrected for temperature (slightly different curves on every unit), transmit and receive signal gains (slightly different on every unit), antenna delays (different on every unit), signal strength dependencies (distance and environment dependent) and antenna gain pattern (probably similar enough on every unit but highly orientation dependent).
Also the internal DW1000 clock resolution works out as being around 5mm so you’ll need to average multiple measurements to remove the quantising effect that has if you want to get accuracies in that region.

The best we’ve managed for point to point range in a real world usable system rather than a static lab environment is around +/- 2 cm. And that has a long list of caveats and requirements to achieve that accuracy.